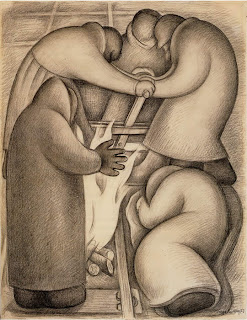 When do symbols have substance? When, and in what sense, does information matter? This project proposes to explore subtle changes in the idea of information over the twentieth-century, with special emphasis on how Anglophone and Russophone thinkers thought about the relationship between information plays in mediating humans and the physical world. While the symbolic abstraction of information dates back at least to Stone Age tally marks, the twentieth-century rendering of a quantifed language is peculiar for the power of execution it lent to the natural, social, and humanistic sciences colligated under the rubric of information.

Of particular interest is the claim that information emerged as a symbolic abstraction in self-communicating systems independent of humans–a hypothesis I propose to try through a critical review of field as diverse as electrical engineering, computer science, atomic-, quantum-, and astrophysics, cryptanalysis, molecular genetics; neoclassical economics, psychology, communication research; literary formalism, semiotics, and phonology. Each of these fields struggled in its own way to formalize a system for describing part of the world; and each of these fields based its worldview in part on a common philosophy of human independence from the self-ordering forces of the material world. Key movements in the natural sciences turned to physical laws of electrical, particle, and energy behavior; the social sciences turned to the search for the calculable constants of human behavior (such as profit-seeking, Pavlovian response, and media reception); and the humanities turned to logical frameworks of symbolic interpretation. At the root of these and other intellectual developments on both sides of the Atlantic was a shared affinity with the mathematical turn toward logical, symbolic abstraction–perhaps both the philosophical root and remedy to the state-driven mass tragedies of twentieth-century.
How has a mathematical turn influenced how we think and regulate questions of the substance of symbols or, in other words, What relationship does information have with the material world that humans inhabit, remains my leading question throughout.
As proposed, the introduction will critically review scholarly literature on the recent history of information backlit by a discussion of alternative understandings of the topic; chapter one investigates the Faustian bargain of early twentieth-century information scientists (such as Norbert Wiener and Andrei Sakharov, among others) as, on the one hand, brilliant minds who operationalized symbolic abstraction into semi-autonomous systems of tremendous executable power and, on the other, conscientcious citizens well informed of the destructive capacity of their work (politically committed scientists such as John von Neumann and Alexei Kolmogorov may provide important counterbalance to this frame); chapter two addresses Soviet leads in the emergence of the distributed computer network and the possibility of a Soviet Internet project; chapter three explores how the evolving vocabulary of information has come bear on information policies in a digital age, especially copyright, over the escalation of transatlantic political conflict and sudden collapse of the Soviet Union.
In particular, the contemporary vocabulary of cyber law and copyright reform may be weakened by misunderstandings the Cold War fetishism of freedom has yoked upon political discourse of information freedom, control, and code. The symbolic abstraction of information from meaningful material form justifies neither the hurried and repeated expansion of copyright nor its opponent in the libertarian belief in freedom as trascendent, independent, or emblematic of (especially US) national culture.
The project in method and content alike looks to argue that we consider the uncertainties of human history, and not its symbolic abstraction into information, as the material base through which to understand and regulate the human imagination of communication. The recent history of information tells us not only something of the ethics of science, the collapse of the Soviet Union, or the substance of symbols like copyright. It also shapes the stories of freedom we tell about ourselves.