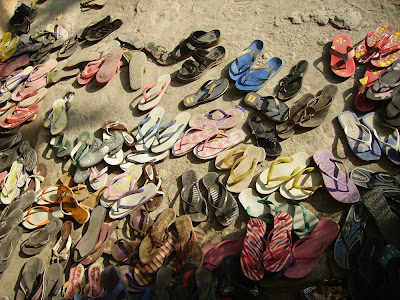 Jonathan Zittrain of the Oxford Internet Institute gave his book talk, The Future of the Internet–and How to Stop It, today at Yale Law School in collaboration with Jack Balkin’s Information Society Project. Although Zittrain presents the dreamy benefits and dreary downsides of what he calls the generative Internet with equal ease (thus surprising his listener with his quiet middle-way conclusion), I find the more I hear of his work, the more I’m persuaded by his concluding call to self-checking generative communities as the desired social response to the unchecked dangers of libertarian Internet protocols and the few no-goodniks out there willing to hurt many to benefit the few. Groups of people united around generative solutions to security issues will do more good than policy and technological fixes.

Zittrain’s call to organize foremost as people has returned me to the classic of the cultural sociology of sharing, What about private property is cultural? Or perhaps for a shorter answer, what about private property is NOT cultural? Of the many possible examples that may make non-proprietary models of social interaction thinkable, consider the following: the moral education of santri (or students in traditional Muslim schools called pesantren in Indonesia) is intimately tied to the experience of communal property.
The passage that makes this point from Ronald Lukens-Bull’s fascinating A Peaceful Jihad: Negotiating Identity and Modernity in Muslim Java (Palgrave, 2005, p. 60) is worth quoting in full:
“In most pesantren, the santri sleep on the floor in a room that may hold up to 80 other students. A room that I would judge to be adequate for one or two students, houses six to eight; the more popular the pesantren, the more crowded the space. The meals are meager: rice and vegetables. Further, although there is an acknowledgement of personal property, in practice, property is communal. Simple things such as sandals are borrowed freely. Other items, if not in use, should be loaned if asked for. The santri who habitually refuses to loan his property will be sanctioned by his peers and sometimes by the pesantren staff. I was expected to follow these guidelines as well and I often found my tape recorder and camera missing. They were always returned later, the camera with all of its film used and with a request to have the film developed. For the santri who does not share, sanctions may include teasing or a stern reminder about Islamic brotherhood and the importance of being ikhlas (selfless).”
It is interesting to note that, like the San people in the Kalahari (see my post here), this communal lifestyle is sustained in a resource-scarce environment. Like the San as well, however, the passing of personal property is not only of necessity but of moral and experiential worth to their community and culture. Students share not only because they will benefit individually if they do, but because the school community makes sure they will be worse off if they don’t (e.g. teasing and sanctions) at the same time it prizes the moral virtue of ikhlas (selflessness) as a goal shared by all active members in good standing. The sanctioning mechanism is probably the less important of the two, as the virtues of selflessness and the aesthetic lifestyle take on a positive meaning that persists far beyond the circumstances of individual need. As Lukens-Bull writes “an ascetic lifestyle in the pesantren prepares the students for either prosperity or poverty. In the former, they will be compassionate; in the later (sic), they will be content” (p. 60). Scarce conditions do not seem a prerequisite to this communal property model, but shared values and socially enforceable stigmas do.