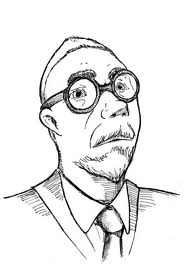 The MIT cluster around Norbert Wiener and Claude Shannon on cybernetics and information theory respectively gave information to technology into the 1940s and 50s. Their definitions are radical departures from what came before.

Norbert Wiener (1995-1964) began as a boy genius (home schooled and built and almost broken by his brilliant and overbearing father, Leo Wiener, an émigré and founder of Slavic studies at Harvard; Wiener recited classics in the original at 5, entered college at 11, and held a PhD in Philosophy from Harvard at 18). An ex-prodigy set to disappoint, in his twenties, Wiener befriended T.S. Elliot and worked in analytic philosophy and mathematics with Bertrand Russell at Cambridge, England and came to know von Neumann, among others in the mathematical capital of Europe at the time, Goettingen, pre-Nazi Germany. Despite the fact he detested lavish and large states, military projects, his science blossomed on the WWII study of anti-aircraft ground-to-air missiles—which realized that in the heat of battle, bullet, pilot, and plan acted in probabilistically predictable and similar fashions—and later, after a dramatic reversal following the death of Stalin in 1953, the study of the Russian “kibernetika” blossomed and remains to this day a popular field for the study of computers. Thus betrothed to the enemy, with a growing CIA file in America, Wiener’s work and politics—not unlike Sakharov or Einstein—crossed purposes.

John von Neumann’s (1903-1957) mathematics and politics did not cross purposes: for von Neumann both were decidedly militant, competitive. Von Neumann grew up in the teens and twenties in Budapest, Hungary. During this period, the tiny Jewish middle-class was trapped between serving the nobility of the crumbling Austro-Hungarian empire and joining the revolutionary lower class movements. Perhaps the product of fierce intellectual competition for opportunities to emigrate, the so-called Hungarian phenomenon produced noted natural scientists such as Dennis Gabor, Eugene Wigner, Leo Szilard, Edward Telle, and chief among them von Neumann, as well as the liberal sociologist and historian Oszkar Jaszi and the communist philosopher George Lukacs. After time at Goettingen, von Neumann emigrated to the US, produced 36 major papers by the age 30, and found himself at home in the political competition of the Cold War.

At the time the marginalized Wiener was meeting with Alexei Kolmogorov in Moscow—possibly the finest Soviet mathematicians who had independently developed the mathematical relationship between information systems and biology—von Neumann was declaring himself a “violent anti-communist,” consulting with the CIA, the US Army, RAND, IBM, and developing strategies of mutually assured destruction, and favoring the preemptive attack.

On the diverging sense of information, to oversimplify, Wiener conceived of information as negative entropy, an integral measure of how much order was in a system, be it mechanical or biological. Information as the basic unit for all organizing systems. The result was his lifelong project: cybernetics, or in his words ‘the study of the communication and control of information,’ was set to become harbinger of universal “informational homeostasis,” Wiener’s near synonym for “world peace.”

Shannon, in turn, gave a technical definition to Wiener’s basic unit: information was not noise, (again a binary distinction: significant only for what it is not) stripping both information and communication of any necessary meaning, writing “these semantic aspects of communication are irrelevant to the engineering problem”. In fact, Shannon resisted calling his work “information theory,” preferring his original subtitle “a mathematical theory of communication.” (In good Cold War tradition of exaggerating the success of funded projects, his interpreter, coauthor, and boss, Warren Weaver, expanded the scope of the theory by renaming their seminal book “/The/ mathematical theory of communication.” Weaver also wrote in the introduction that the theory could apply “indeed to all of human behavior”—the near exact opposite of the strictly technical sense of information Shannon developed for engineering problems.

A couple years before his death, Shannon wrote “I thought communication is a matter of getting bits from here to here, whether they’re part of the Bible or just which way a coins tossed.” Thus, the traffic of irreducible ‘bit’ (literally, a ‘digital binary,’ his coworker’s term), information become the content of communication; communication became the transmission of signal; and transmission become a traffic problem (cf. queueing theory and packet-switching as theories of waiting in line).